Smart Office, the Infor product with the best looking implementation of the new SoHo design was released in May. GA date for Lawson applications was the 16: th of May and GA date for M3 was the 23: th. In Stockholm we celebrated the new major release of M3, 13.1 with cake and a mini Inforum with sessions.

First of all it’s the new SoHo design! I know there will be lots of discussions about this design just as we had with the jade green when we selected the canvas background for Smart Client. The new design is modern and clean and I like it. 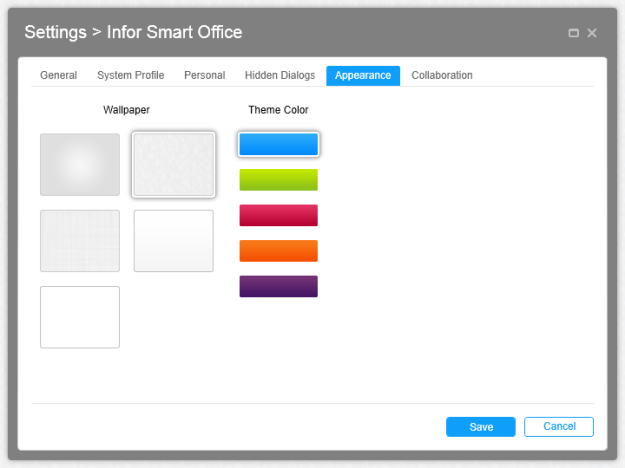 Before I’ll give you a highlight from the release notes I would like to clarify a few things about 10.1 and 10.0.5 and give you some information on coming service packs / fix packs.

There is no upgrade path from previous versions. Migration support will be added in 10.0.5.2 and 10.1.1 so I would recommend you to wait until those versions are delivered before installing 10.1 in a production environment unless you are OK with a new install. There are always files/data that you can manually move if you as an administrator has a lot of knowledge about the different data that we store on the server, but for example user files such as settings will be lost.

This means that you cannot install 10.1 on Windows XP (or equivalent). For those customers that still have clients on XP we recommend 10.0.5.2. Note that this version does not have as much new functionality as 10.1, but we have pushed down some enhancements because we expect that version to be around for at least as long as Microsoft has extended support for Windows XP. But it is not the same as 10.1 so for all the news you need to be on 10.1.

We have changed to only building only 32 bit installations. If you develop features and use 3rd party components you need to verify that they still work. If you have had issues with web plugins that requires 32 bits you will be happy for this change.

One of the changes we did for 10.1 was to change the database design so that we can run on MS SQL server and not only the H2 database. The data we have is still mostly file based but the files are stored in that database and in the coming service pack 10.1.1 we will move some of the remaining files (like the profile.xml) to the database as well.

Note! We tested this on a specific version of the GDBC application in the grid, as it turns out version 2.0.5 has an issue so you cannot connect to an SQL server so you would need to get a fix on GDBC 2.0.5 before installing on an SQL server. Unless you run grid version 10.1.9.6 and GDBC 2.0.3, because that version has been verified. So watch out for the correction on the grid extensions /GDBC component.

What does this new style mean for me as a developers?

We will probably write more posts on this topic but what you need to do is test your applications and mashups in the new style to see how they look. If you have keept to standard you should be more or less fine. But there is a line here between 10.0.5 and this new version becuase in 10.1 there are a bunch of new classes and stuff that you will start to use and those buttons etc will not be available in 10.0.5. There is also no way to get margins exactly right in both versions. But I have so far never seen an application or Mashup (developed outside or our team) where I couldn’t spot an issue with incorrect margins or alignment.

For mashups there is a compability resource dictionary that you can add to your mashup if you want the old implicit margins. We probably need another posts just on Mashups, and then another on SDK applications. The goal was that as much as possible should just look more or less the same, but you need to verify that by testing your application in the new version.

Becuase of this style change there are considerations you need to do in your development when developing for multiple versions of Smart Office. You can still develop for 10.0.5 and previous version and install on 10.1 but you cannot reference image resources contained in Smart Office or hard code brushes/colors.

The S3 Tech blog has a video about the 10.1 and they also have some information from the Inforum sessions.

© Infor, 2017. Unauthorized use and/or duplication of this material without express and written permission from this blog’s author and/or owner is strictly prohibited. Excerpts and links may be used, provided that full and clear credit is given to Infor and www.smartofficeblog.com with appropriate and specific direction to the original content.
Loading Comments...