The most common way to extend the functionality of M3 panels in MForms is to use JScript files but there are other options such as Script assemblies and MForms extensions. With Script assemblies you can write code in most languages supported by .NET such as C# and VB.Net and you can actually debug your code using Visual Studio. Instead of deploying the script as a JScript file you use a .NET assembly in the form of a DLL file.

Script assemblies do not add any additional functionality compared to JScript files but it gives you more language options and a richer development environment in Visual Studio. The entry point to a Script assembly is an Init method in a public class in the MForms.JScript namespace, exactly the same as for a JScript file. Although you can choose to implement your scripts in almost any .NET language I would recommend using C#.

This post will describe how to create, test and debug a basic HelloWorld Script assembly. I will assume that you are already somewhat familiar with JScript so I won’t repeat what you can do with JScript but rather how you can build script functionality in a different way.

When to use Script assemblies

Using Visual Studio gives a lot of gained productivity when developing and debugging but is also adds some complexity. If you are used to Visual Studio the choice might be obvious, if you have never used Visual Studio or coded in C# the step might be too great. Even if you don’t want to try this right away you know that you have the option in the future.

If you want to build a Script assembly you need some version of Visual Studio. There is a free version called Visual Studio Express 2012 for Windows Desktop that can be downloaded from http://www.microsoft.com/visualstudio/eng/products/visual-studio-express-for-windows-desktop

In the example in this post I will use Visual Studio 2012 and C# but you should be able to follow along if you are using a different version of Visual Studio or another language.

This section describes how to create a Visual Studio project for a script assembly.

You should now have project configured for creating a Script assembly for MForms.

You should now have a blank class and there are couple of changes we have to do to make the class into a script. If you have worked with JScript before these steps should be very familiar.

The code in your script class should look similar to this.

Now you have a Script assembly that can be deployed but it doesn’t do anything so we need to add some code.

Adding code to the script class

To be able to test the script class we need to add some code to it. To keep this example simple I will just get some values from the parameters to the Init method and show a message box with that information.

Finally the ConfirmDialog is used to show the message to the user. The complete script code looks like this.

Building and deploying a Script assembly

To build a script assembly you simply use the Build > Build Solution menu item in Visual Studio or use the keyboard shortcut (F6 with the C# settings). Unless there are any errors in your solution you should get a Build succeeded message in the Visual Studio status bar.

You have a couple of options of how to do this during development.

Any of these solutions will work and there are probably other options as well.

If you don’t have a local script directory configured follow these steps:

Configuring and testing in MForms

Refresh the panel. A dialog similar to the screenshot below should be displayed. 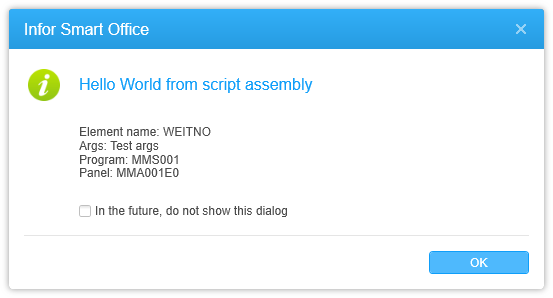 Note that you can still clear the script cache if necessary using the command mforms://jscript/clear

One of the great benefits of using Script assemblies is that it is possible to debug them using Visual Studio. Since you are not starting Smart Office from Visual Studio like you do when using the SDK you must attach the debugger to the Smart Office as described below.

The instructions assumes that Smart Office is started from the installation point, that Visual Studio is open with the project, that the Script assembly has been deployed and that the script is configured for the panel in MForms .

Update done by Karin. This post was written three years ago. In most cases we never update old posts and details to change over time. It is important to know that in M3 13.3 and possibly before that the script files has been moved to the database. If you as a H5 administrator has a Admin tools link in your menu with a tab that says Data Files then you must always manage deployed scripts via the tool – or they will be lost as you apply a patch or upgrade the solution. For dlls there is also an important note to consider.

For dlls you must use the import zip button in the data files tool.

Take your dll and add it to a zip. Import the zip by clicking “Import zip” in the Data Files tab in the administration tool. To export the dll successfully make sure to select more than one file in the tool so that a zip is exported instead of a single file.

23 thoughts on “Script assemblies in MForms”

This site uses Akismet to reduce spam. Learn how your comment data is processed.

© Infor, 2017. Unauthorized use and/or duplication of this material without express and written permission from this blog’s author and/or owner is strictly prohibited. Excerpts and links may be used, provided that full and clear credit is given to Infor and www.smartofficeblog.com with appropriate and specific direction to the original content.
%d bloggers like this: