Scaling out the Smart Office server can be done for different reasons. Being able to serve more users or creating a more robust environment.

When talking scaling out an environment it is not only Smart Office server that needs to be considered, it is also the Grid Registry, Grid Session Provider and the connection points into Grid (Grid Routers) that must be included.

This article will describe one way of creating an environment with Smart Office that can handle a larger amount of users and also be more resilient for malfunction hardware using Infor Smart Office 10.2.1 and Infor ION Grid 11.1.13.

As a starting point Grid, LDAP Session Provider and Smart Office have already been installed.

Adding a host to Grid

The first thing needed is to add another host in the Grid and to be able to do that the host must first be added in Lifecycle Manager (LCM). The process of adding a host in LCM is described in the LCM install guide. The steps are shortly described below.

To add a host to the Grid:

To enable failover for Grid Registry do the following.

A load balancer must always be placed in front of Grid to be the single entry into the Grid to ensure that even if a host where a Router exists on dies it is still possible to connect to the Grid. A client will not know if a Grid host is failing or another host is added since it always connects to the load-balancer. But what if the load-balancer dies? There are techniques for having clustered load-balancers as well, but that is out of scope for this article.

The load-balancer should also have a health mechanism so it automatically removes a hosts if it malfunctions.

Note that the SSL certificate used in each Grid Router must be issued with the load balancer address and it is recommended to use the same certificate in all routers.

Either create a new Grid Router on each host that should be included by the load balancer or configure one router to be on started on <all hosts>.

Below is the Default Router set to be started on all hosts and they will all be using the same HTTPS port. 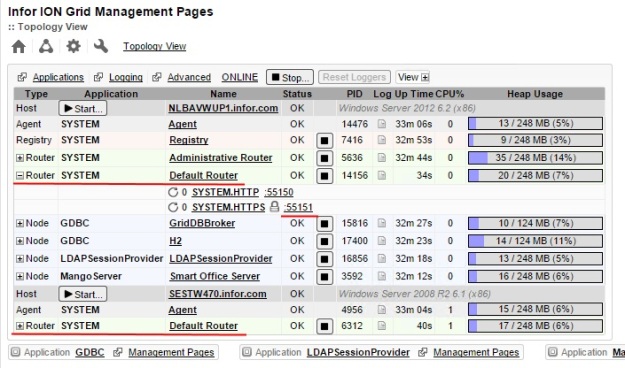 SSL certificates are managed per host, not per Grid Router, and must therefore be added for each host. It is recommended to use the exact same certificate on all hosts, clients may be confused if getting a different SSL certificate depending on which host is being called through the load balancer.

Before creating any SSL certificates decide the address of the load balancer.

To create a SSL certificate from an internal Certificate Authority (CA) and add it to all hosts do the following.

In a production environment a load-balancer is most often a piece of hardware, for more information contact your hardware vendor. In a test environment a software load-balancer can be used. For this blog post I used http://nginx.org/ which has a community edition that is free and works on several operating systems including Windows. In my example I have configured nginx with TCP pass-through to two servers. The configuration file is similar to this.

Some Grid Applications can be scaled out to several machines, other cannot. Some can run several instances at the same time and some cannot. Both Smart Office and the different Grid Session Providers are Grid Applications and have some different characteristics. The details are listed below.

Even if a Grid Application cannot run two instances at the same time most Grid Applications can be started on another host if the original host dies. Within minutes a fully working environment is up and running without human interaction.

There are a couple of things that needs to be prepared and considered when implementing a complex environment when it comes to Grid Applications. 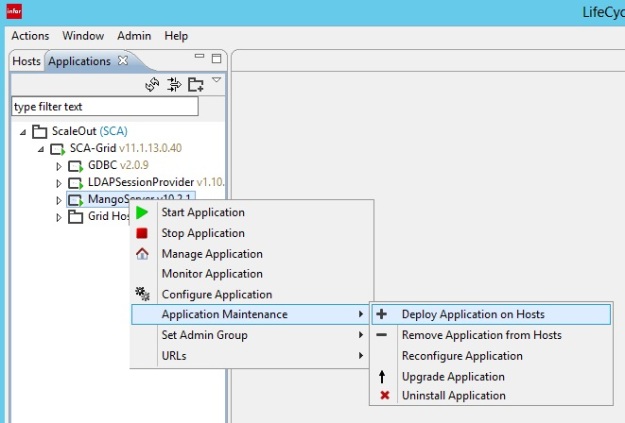 In the Deploy Application on Hosts dialog, select the hosts where the application should be able to run and press Next. Press Finish.

The Grid Application is now possible to start on all hosts it is deployed to.

The Bindings for a Grid application is found on the application page in Grid Configuration Manager.

For a robust scenario you would like to have the Grid Application run on a minimum of two hosts always to ensure having at least one instance running even if a host dies. Mark the hosts where this binding should be enforced and select Constraint Type to be Per Host. This configuration will result in one instance of the application running on each of the selected hosts.

If having Constraint Type set to Global and Min to 2 would result in almost the same behavior. There will still be two instances of the application but it is not defined if the running instances will be started on the same host or not.

When having an application that only can run in a single instance the following configuration would result as a failover behavior. Constraint Type = Global and Min = 1. 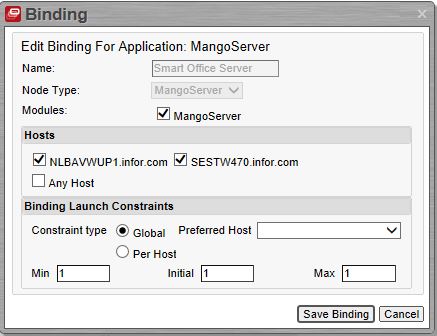 When having Grid Applications that cannot run several instances at the same time but have deployed the application to several hosts Grid will start the application on another host if the preferred host dies. Verify that there is enough memory left on the host where the application is supposed to start before a failover will occur.

Note that memory consumptions from other application will not be taken into account.

Use the methods describes above to deploy the session provider to additional hosts and configure the bindings. The table below describes what each Session Provider supports.

* LDAP SP can only be deployed to several hosts if configuring the connection to the LDAP with the LDAP protocol. If using LDAPS or Start TLS protocol the LDAP SP will not function properly if deployed to another host. Note! The LDAP protocol should never be used since it sends userid and password in clear text over the network.

Configuring Smart Office server when using a load-balancer is done with a few steps.

To change these URLs open the management pages for Smart Office in Grid Management Pages and click Installation Point Configuration.

Change the Installation URL and HTTPS URL to the Grid to point to the load balancer. I am using the https port only but if the load-balancer is configured to pass through both http and https, http can of course still be used for the installation point. Do not forget to save (some versions of Smart Office has a bug that wrongly shows the old values after saving).

To install Smart Office client open an Internet Explorer and navigate to https://<load_balancer_address>:port/mango

Collaborations does not work properly when using a load-balancer and should be turned off.

There are two main Lawson admin tools that you should know about: the Role Manager and the Personalization Manager.  These tools are only available to those users with Portal Admin access. END_OF_DOCUMENT_TOKEN_TO_BE_REPLACED

There are a lot of admin tools for Smart Office and sometimes it is hard to keep track of them all. So I thought I would give you an overview of the admin tools, where to find them and what they are for. There is more information in the Admin Guide. I’ve also got a special request to document the URIs for all tools. END_OF_DOCUMENT_TOKEN_TO_BE_REPLACED

During Ask the Experts webinar for (mainly) Lawson customers we got a lot of good questions. I’m going to try and answer some of the questions in coming posts and today I’m going to give you some tips and tricks for updating and migrating data to 10.1 and later. END_OF_DOCUMENT_TOKEN_TO_BE_REPLACED

Smart Office 10.2 is released for M3! I don’t have a release date for Lawson Applications but I will let you know as soon as it is released. This post contains overview information about the new features that we have developed in 10.2 for both M3 and Lawson applications. There are many new features and we will start a series of posts to cover all new functionality in greater detail.

END_OF_DOCUMENT_TOKEN_TO_BE_REPLACED

© Infor, 2017. Unauthorized use and/or duplication of this material without express and written permission from this blog’s author and/or owner is strictly prohibited. Excerpts and links may be used, provided that full and clear credit is given to Infor and www.smartofficeblog.com with appropriate and specific direction to the original content.